A hybrid telephone system offers the advantages of both a traditional PBX-style system and a more modern VoIP-style system allowing for easy communication on both interfaces. At Telecom in DFW we offer comprehensive services for business including Installation, Configuration, and Maintenance of your cloud-based telephone network. 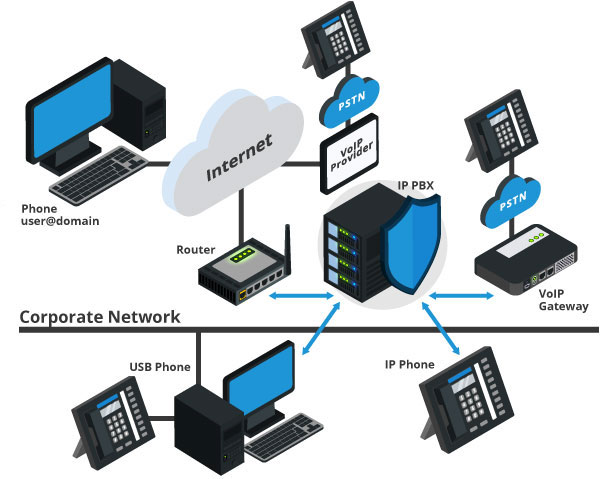 How does a Hybrid Telephone System work?

In a Hybrid PBX or hybrid telephone network, your traditional communications network (PBX) is connected to a device or router turning your network into a cloud-based communications system.

One side of the device connects all the internet devices used in the business and the other side connects to the external networks of your service provider.

There is usually a WAN (to the internet), a LAN (to the internal network), a console port, and LED lights to indicate which lines are active. Asterisk, and its many derivatives, is the most popular method of deploying hybrid PBX.

The most important feature of a hybrid PBX system is fault tolerance: if either the legacy PBX or VoIP server fail your network will automatically default to the working network.

One of the biggest benefits of having a hybrid PBX can also be its biggest drawback: cost. You have to buy and maintain an on-premise device. The largest hybrid PBXs are well over a thousand dollars. But, you can end up saving money in the long term by owning your own equipment, rather than having a third party host your PBX.

Benefits of a Hybrid Telephone System

There are no long-distance charges if you call from one office to the other remote branch through the hybrid PBX. If a location is temporary, such as an amusement park or construction site, you can use cordless phones to connect directly to the hybrid PBX. It can be expensive and a little psychologically unsettling to make the jump to VoIP, especially if you think your phones work “just fine the way they are, thank you.” On top of that, many vendors lock you into long-term service contracts. Given those realities, it makes sense to have a new office, or new phones in an office, be IP phones, while still maintaining your existing infrastructure.

What makes Telecom in DFW different?

For all your Hybrid Telephone System needs, there’s only one name to know, and that’s Telecom-In-DFW

We’ve offered only the highest quality state-of-the-art products and our staff is dedicated to finding you the most reliable and cost-effective solutions to satisfy your specific requirements. We understand that your telephone, voicemail, email systems are a crucial part of your business and we’ll make sure they’re running at maximum efficiency.

Telecom in DFW makes a difference.

Telecom in DFW will look at endless solutions to find what suits you best.

You can consult with us before we start working for you.

Our every design is exclusively for you.

We are connected with you 24/7

We are affordable and offer value for money services.

Want to consult about your phone system setup, VoIP technology, Hybrid Telephony, pricing, products, or something else? We offer initial consultancy for free.